Posted on August 15, 2017 by joanmickelsonphd

RADIO INTERVIEW ABOUT MY J. W. YOUNG BIOGRAPHY ON STATION WLRN.  On August 1st, 2017 I had the pleasure of being interviewed on radio station WLRN Topical Currents by Bonnie Berman and Joseph Cooper. We discussed my biography of Hollywood’s founder, Joseph W. Young, Jr.  They are wonderful interviewers, asked helpful leading questions, making the whole experience quite enjoyable. If you would like to listen in, here is the link:  http://wlrn.org/post/city-hollywood-founder-joseph-young.

Just a reminder: the book is still available. You should be able to order it from your 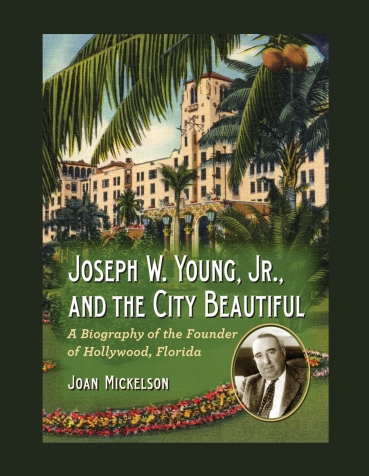 Here’s a plug: Published by

McFarland, my book has footnotes, bibliography, and an Index, as well as about 90 images.

That’s right, it’s Young’s overall plan for his city that follows Chicago architect Daniel Burnham’s recommendations for creating a City Beautiful.  Hollywood is not a simple grid around a central circle, nor is it just a city with a beach, those those are all part of it. Young’s plan is rectangular, with its central spine, 100-foot wide Hollywood Boulevard running east and west. On either end of his boulevard Young established a terminating vista, one handsome hotel on the ocean and the other hotel (now gone) on what was then the edge of the Everglades.

To create elements of interest along this spine Young inserted three ornamental circles, one a park, the next the site for the city hall, and the western termination. Please note, these were not intended as traffic circles, a means for slowing north-south traffic (and yes, the city was planned for automobiles not horses). The ONLY north-south road through Hollywood when the city was planned, was the Dixie Highway, just to the west of Flagler’s railroad tracks. The Federal Highway (U.S. 1) was not put through until the 1930s. If Young had wanted to use a circle to slow traffic in the 1920s, he would have put one on the Dixie Highway.

From 1923-25 Young had his engineers create two lakes, North and South Lakes, from what was originally the East Marsh. These added to the geometrical symmetry of his entire plan, with the circular lake heads repeating the circle theme, while framing the vista of the Beach Hotel on the Atlantic. At the west end the circle is banded by four arcing roads that lead the driver back to the center of town.

Young’s handsome, geometrical plan, which still may be seen from the air, has been praised by city planners. This plan encompassed all the area then owned by Young’s companies, ending at the west at about 56th Avenue. But reading from Young’s newsletters it seems clear that he envisioned extended his properties west farther est, but his plans were halted by the economic Depression and then by his too-early death in 1934 at the age of 51.

Here are two of the scenic vistas Young created along his Boulevard: 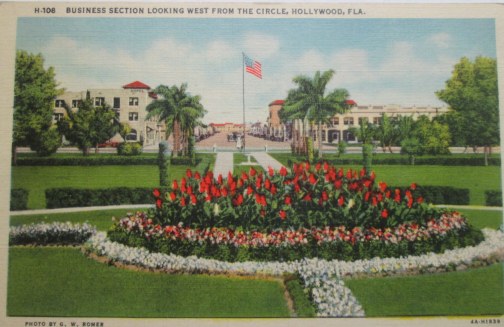 Looking west from Young Circle along Hollywood Boulevard downtown, to City Hall on its own circle. Photo by G. W. Romer. 1940s? postcard

Today there are North-South roads in Hollywood that Young never anticipated, and the city extends almost twice as far to the west as his original plan. Nevertheless, Young’s 100-foot wide Boulevard with its three ornamental circles remain the center of Hollywood, Florida.