Posted on December 9, 2017 by joanmickelsonphd

HAVE YOU NOTICED SOME FAKE INFORMATION ABOUT HOLLYWOOD CIRCULATING ON THE INTERNET?  HERE’S SOME:

It’s been brought to my attention that at least one website that offers “historical” information about Hollywood, Florida, states that J. W. Young created Hollywood “as a suburb of Miami” “in hopes of building a motion picture colony.”  Wrong, wrong, wrong.

First off, Young didn’t put all his time, effort and funds into building a “suburb.”  He was building a CITY. He founded it in 1920, and had Hollywood incorporated in 1925.

Next, I can only assume that the belief that Young was trying to create a movie colony is solely based on the name Young gave to his city.  In numerous previous blogs, and my books, I have explained that Young didn’t choose the name “Hollywood” due to a fascination with movies made there. He simply liked the name. There are some 18 Hollywoods in the US, some dating to the 19th century. Most were named for the holly bush.

If Young had been influenced by motion pictures in his choice of name, he more likely would have chosen “Long Beach,” where he lived for about 15 years. During his time there, 1902 to 1916, Long Beach CA was indeed the major west coast motion picture setting as it was the home of SILENT movie-making including a company called Balboa Films. See the excellent book on this topic by Jean-Jacques Jura and Rodney Bardin II, Balboa Films, 1999.

NOT A MOVIE BUFF. Actually, I’ve never come across anything that suggests that Young was a movie buff. Clearly he supported live entertainment, chiefly music-related, bands, parades, concerts, dancing. From the start of Hollywood, he included musical entertainment in his hotels.

Young also provided outdoor entertainment for all his visitors, setting up bandstands in his sales pavilions and on Hollywood beach.

Below is a temporary bandstand at Johnson Street and the Broadwalk, about 1925. 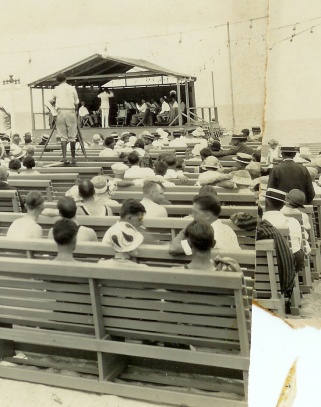 Young went so far as to have an excellent concert and marching band on his Hollywood Land & Water Company payroll. These two photos show bandleader Caesar LaMonaca in his white suit (above) and his Hollywood band in all their finery (below). 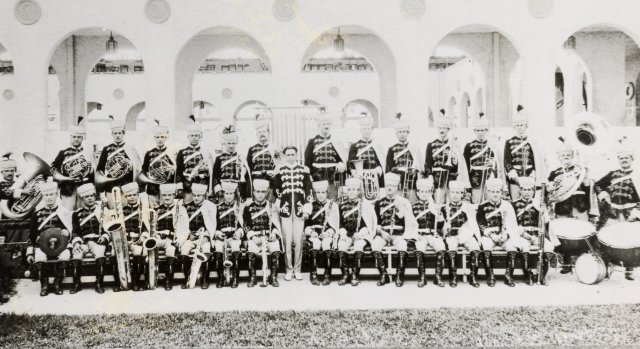 By 1926 Young was able to bring the nation’s top dance orchestra leader, Paul Whiteman, to play for the grand opening of his Hollywood Beach Hotel.

NEVER BUILT A THEATER. But note: as far as movies went, Young never built so much as a single movie theater. Yes, there was a theater on Hollywood Boulevard by 1923.

Photo courtesy Hollywood Historical Society.
But it was strictly a stage theater. And Young didn’t build it. The builder/owner was Arthur Enos. Only in the 1930s after Young was gone, did a movie distributing chain rename that building the Ritz Theatre and set it up to show movies.

J. W. YOUNG NEVER BUILT OR EVEN PLANNED SOUND STAGES. Although Young documented everything built by his company, from hotels, to office buildings, to a publishing house, to a bank, there is no record of Young and his company building even one movie set/sound stage. Young knew about sound stages as there were several in Long Beach, spread over several city blocks, while Young lived nearby.

Moreover, there are no movie sets/sound stages on the various city plans drawn by Young’s engineers. Nor does anything resembling sound stages appear on the 1926 Sanborn Map of Hollywood, which carefully documents even small structures such as garages and sheds, for the benefit of the fire department. (Young had established a fire department in 1923.)

DID NOT ADVERTISE A “MOVIE COLONY.” His vast advertising campaigns don’t mention “home of” or “future home of” a movie colony.

DID MAKE A DOCUMENTARY FILM ABOUT HOW HE BUILT HOLLYWOOD. As he lived in Long Beach in a time when movies were being made there in large sound stages and even on the city streets, the process of movie-making wasn’t lost on Young. As he built his city, Young documented every step, in newsletters and in still photography. So it isn’t surprising that he turned to another medium and had a documentary film made of his burgeoning new city as it appeared in 1925. Still photos of that year, especially around the Fourth of July, show a movie cameraman on a raised stand filming all around the city,

in particular the parades on the Broadwalk and marching bands on Hollywood Boulevard.

But Young didn’t own the film company. Instead he seems to have hired a firm from Miami (where there was a “movie colony”) to make this documentary movie. There’s no evidence that Young was ever interested in “story” movies such as were made in Long Beach and later in Hollywood CA.

NO EVIDENCE OF A “MOVIE COLONY.” So much for Young trying to create a film colony. It’s to be hoped that the misinformed website will remove this false information about Hollywood, Florida.

Instead, they might mention that J. W. Young’s interests were more business-oriented as he created a “City Beautiful” and an international port, now Port Everglades.

Did the convicted criminal Al Capone live in Hollywood?

NO, AL CAPONE DID NOT LIVE IN HOLLYWOOD.  He had a large, well-guarded mansion on Palm Island in Miami Beach, which still stands and is known to have been Capone’s. He never owned property in Hollywood (you can check this out). When he bought his Palm Island place he added protective walls, and kept it fully guarded. Then he was sent first to jail in Pennsylvania, then on to Alcatraz. Eventually he returned to Palm Island, a sick old man, and died there. Read the biographies of Capone—they don’t mention Hollywood. Capone’s bases were Chicago, of course, then Miami Beach.

Hollywood eventually had other mobsters, like Giancana, Jimmy Blue Eyes Alo, Potatoes Kauffman. We know where some of their houses are. But NOT AL CAPONE!

Here’s a screwy legend: someone on Facebook thinks prostitution was legal in “early” Hollywood.

PROSTITUTION WAS NEVER LEGAL IN HOLLYWOOD, or anywhere else in Florida that I’m aware of. Why do people want to turn Hollywood into a den of iniquity? J. W. Young created the city in 1920 as a City Beautiful, a town consciously designed to be a fine place to live and raise a family. There wasn’t any crime in Hollywood in the 20s (well, besides bootlegging) and even into the 50s people weren’t locking their doors, or cars. Open gambling sprang up in the mid-30s when Prohibition ended (cutting off that illegal source of income), but the city’s tiny population (under 4,000) didn’t like that, tried to crack down on the gambling sites, and kept legal betting at the race tracks out of Hollywood. The Hollywood Kennel Club was and always has been in Hallandale. Likewise Gulfstream Park. In 1950 the Kefauver Commission came to South Florida and shut down all the gambling (which just moved elsewhere), but this is beyond my area of research. Easy to look up yourself if you want to know more about it.

But back to the suggestion there was prostitution in downtown Hollywood in olden times. (Hollywood came into existence in 1920, so “olden times” would be the 20s and 30s, I guess.) This I think is just gossip, people making up stories for their entertainment value. One example is the claim that there was a sort of brothel upstairs in the former publishing company building of the Hollywood Land & Water Company, which still stands on 21st Avenue.

The first floor of the original building is chiefly two or three large spaces, while the second floor front contains a row of small rooms, with doors, and windows overlooking 21st Avenue. Because these rooms seem small today, the myth has arisen that they contained beds and served prostitutes. Oh, come on. They were offices. Window offices, overlooking the street.

Downstairs was a printing plant filed with great big, very noisy presses, so the editors and sales managers and bookkeepers had their offices upstairs.

At right, printers and presses on the ground floor of the Hollywood Publishing Company in 1925.

Why were the offices upstairs so small?  Actually, most of the houses and rooms in Hollywood buildings were smaller in the 1920s and 1930s than those we are used to now that were built after World War II.

Another putative brothel about which I’ve heard gossip, is right on Hollywood Boulevard. On an upstairs floor it has a row of small rooms with a single bath at one end of a hall. I’ve never seen this one, but suspect that if it was built in the 20s, the rooms were used by men who came to work in Hollywood as the city was being built. A bath down the hall for roomers, or boarders, was extremely common, much more so than private baths, and early Hollywood was really short on inexpensive places for workmen to stay. Young even built temporary dorms around the new city where men were working, then tore these down when the land was sold to new buyers. So a private individual providing tiny rooms for workers isn’t surprising.

However, if you can document the presence of an actual brothel in downtown Hollywood, I would be very interested in your documentation.

FACTUAL DOCUMENTS AVAILABLE AT THE HOLLYWOOD HISTORICAL SOCIETY.  So, before jumping to conclusions and jumping onto the Internet with them, a little research is in order. A large amount of information about Joseph Young and Hollywood, Florida in general can be found in the Research Center of the Hollywood Historical Society.

At 1520 Polk Street, is the historic 1935 Vera and Clarence Hammerstein house.

The Hollywood Historical Society’s Research Center is behind the house, which you reach by following a sidewalk along the west side of the house. 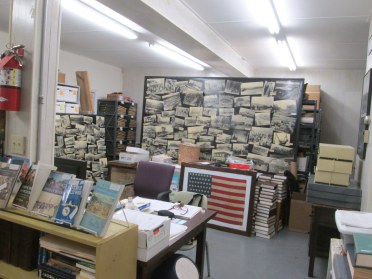 The volunteer archivists there will be happy to help you. 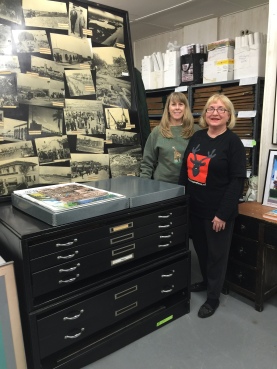 This entry was posted in City Beautiful, Florida history, Uncategorized. Bookmark the permalink.